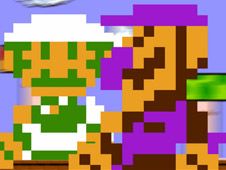 In the FNF Luigi Death Stare Funk Mix, you will see a battle between Luigi and Waluigi as they are go-kart racing, a battle that is going to take place on one song called 'Rollin'!

When the floating arrow symbols match above Luigi on the right side of the screen, that is when you need to press the identical arrow keys to hit your notes, and if you do it until the song ends, you win, but if you miss your notes multiple times in a row and the health bar depletes, you will have lost instead. Good luck, and see what more mods we've got in store for you all!