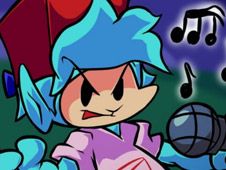 What is FNF vs Slendytubbies Funkin Rap and Death?

Boyfriend faces off against the Slendytubbies of Creepypasta lore once again, this time in the FNF Rap and Death mod, which has even more songs than in their original one, and we now invite you to have a really awesome rhythm battles on the following tracklist:

Defeat the Slendytubbies in the FNF Rap and Death mod!

Whether you are playing in the story mode or free play mode, to win you need to do the same thing, which is reach the end of the songs by playing their notes according to the charts, but know that missing your notes multiple times in a row leads to your loss, which happens when your health bar gets depleted.

So, when you see floating arrow symbols match above BF's head, that is when you need to press the identical arrow keys. Good luck, enjoy!