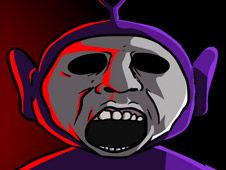 What is FNF: Slendytubbies Mod – VS. Tinky Winky?

The Teletubbies have been possessed by the demonic powers of the Slenderman, and now, their only salvation to return to normal is if Boyfriend is going to defeat them in a rhythm battle, which is what you are giving your best towards right now and here by playing this awesome new mod, where you do battle on the following songs:

Defeat the evil Teletubby through the power of music!

You are going to be able to play this game in either the story mode or the free play mode, it is up to you, and you have to give your best to reach the end of the songs and turn the progress bar in your favor to win, which is done by hitting all the notes at the right time.

How do you do that? Well, you tap the arrows at the same time as the arrows above BF match with one another, but be careful not to press them at the wrong times, because if you do that too many times in a row, you lose the game.

Start now, and make sure to invite your friends for fun as well, they might not know about our awesome FNF Games!