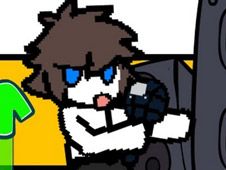 What is FNF Changed Mod?

Only on our website can you be the first one to find and play some of the best new Friday Night Funkin mods online for free on the internet, which is the reason why right at this moment we are sharing with everyone here the awesome new game called FNF Changed Mod, which brings something new to the table, as all previous mods have done so far!

Go up against a pixelated boy caught changing!

A badly-rendered boy with spiky hair and just trunks on is going to be the new opponent you face off against in the Week 1 and Week 2 levels, where the songs remain the same, but he is the character you face off against, unlike the original antagonists. Reach the end of the songs and turn the progress bar green to win!

You will press arrow keys on the keyboard at the same time as the arrows on the screen above BF match, and you should be careful not to tap them too early, too late, or press the wrong keys since too many of these misses in a row means you lose the game. Good luck, enjoy, and we hope to see you around, even more, today and any other day!