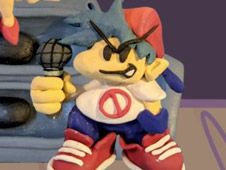 What is FNF Clay Mod?

Sometimes, the new Friday Night Funkin mods online that you get to play for free on our website don't bring along new characters, only the original ones, but instead, create something new through animation or music, and we love to see it, especially with a really special game such as the new addition of FNF Clay Mod!

What is the FNF Clay mod?

Well, as the title suggests, instead of the regular video game animation that is used on the characters, they are rendered to look as they would be made out of clay, which is really cool, because clay animation is one of the cornerstones of animation, and it's fun to see these characters depicted like that!

Despite the game looking different, your goal remains the same, which is to go week after week and help Boyfriend defeat all the antagonists he encounters in rhythm battles so that he can be together with his Girlfriend. Daddy Dearest, Mummy Must Murder, Pico, the Spooky Kids, or Senpai are just a few of these characters we know you love so much!

To play you have to use the arrow keys, pressing them when the same arrow over Boyfriend is matching, as the arrows represent musical notes, and if you hit all the notes at their right time in the song, you win, but missing too many notes of a song in a row means losing, so make sure not to let that happen! Good luck!