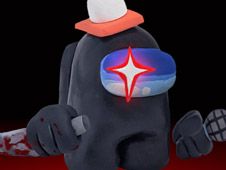 What is FNF vs Black Sings Defeat but in Clay?

It really has been a while since we've had any new FNF Games with Among Us added on our website, so we are very happy that right at this moment we could share with you the amazing new game called FNF vs Black Sings Defeat but in Clay, where the Black Impostor is now made in clay, and you will help him sing the song known as 'Defeat'!

Boyfriend Vs an imposter made out of clay, what more would you want?

Well, when you see arrow symbols above BF's head being matched with one another, you will have to press the same arrow keys, and you need to keep doing it until the song ends to win, so give it your best to do that.

Be careful not to miss pressing the keys too many times in a row, because if that happens, you will have lost and be forced to start all over again from scratch. Enjoy!