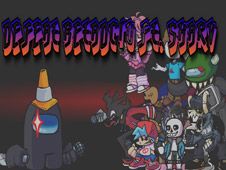 What is FNF: Defeat but Everyone take Turn Singing?

So many characters have now come together to sing 'Defeat' in this brand new FNF mod online for free offered by our team, a game that we definitely recommend, since not only is the song a banger, but it isn't every day that so many characters are featured in a single mod from this category!

Enjoy the song known as Defeat together with a full cast of FNF characters!

There's only one song, so simply hit the 'Play' button to start! When arrow keys are matching above the character that you control at the moment, press the same arrow keys on your keyboard, and keep doing it until the song ends to become its winner, simple as that!

Be careful not to miss pressing the keys too many times in a row, since that will lead to you losing the whole game, of course, and the many characters going up against you will win. Good luck, and all the best we wish you all!