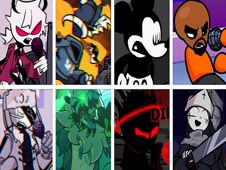 What is FNF: Attack but Everyone take Turn Singing?

If you are a long-time player of FNF Games online, you might really love to play games where multiple characters from the series sing the same song in turns, and you help them take it to the end, and if that is the case, it's your lucky day, because right at this moment we have added for you all the awesome new game known as FNF: Attack but Everyone take Turn Singing!

Sing Attack with all your favorite FNF characters!

As usually, your goal is to reach the end of the song, but that will only happen if you hit the notes of the song at the right time in the charts. To do this, when arrow symbols are matching above your character, at the same time you will have to press the same arrow key.

If you miss pressing the keys multiple times in a row, by pressing too early, too late, or simply hitting the wrong key, you will end up losing and having to start the song again from scratch. Good luck, cause you need it, but more importantly, we hope you've got great focus to use!