FNF: Casanova, but Everyone Takes Turn singing it

FNF: Sansational but Everyone Takes turn Singing it

FNF: ThunderStorm but Everyone Takes Turn singing it 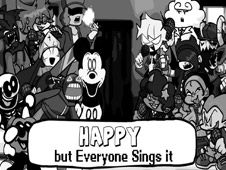 What is FNF: Happy but Everyone Takes Turn Singing?

Happy has become the most recognized song attributed to Suicide Mouse, and this is because the song goes against his depressed persona, so many characters from FNF have decided to sing it to him, and maybe cheer him up, which is why in this game, for every turn there will be another character singing it, such as Annie, Sonic.Exe, Impostor, Sans, Zardy, Bob, Whitty, Garcello, and many other surprise appearances!

Sing Happy with Suicide Mouse and his FNF friends!

When the turn comes for you to sing, you will see arrow symbols matching above your character, and, at that moment, you will have to press the same arrow keys on the keyboard, and if you keep doing it without mistake until the song ends, you become the winner!

Of course, if you miss pressing the keys too many times in a row, you will lose and be forced to start again from scratch, something we definitely don't wish for you, as we hope to see you win and have tons of fun!