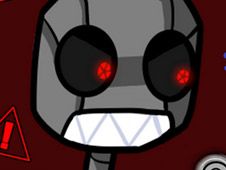 What is FNF QT Mod – Termination on Extreme difficulty?

When it comes to various FNF Games we've had so far on our website, there is no doubt at all in our minds that the FNF QT Mod was one that was beloved by many, since it features some lovable robots and some cool songs, and the stand-out song from that mod is definitely the one known as 'Termination', which you now get to experience again, but this time on extreme difficulty, meaning that it will be more difficult than ever to complete it!

Defeat the QT robots, but this time, put in even more effort!

You will hit the play button to start, since there's only one song, and have to give it your best to reach the end of it by playing all of the notes according to the charts since that is the only way to win.

This means that when you see arrow symbols above BF match one another, you need to swoop in and press the very same arrow keys from your keyboard.

Take note that if you miss pressing the keys too many times in a row, that leads to you losing the game and having to start all over again from scratch. Enjoy!