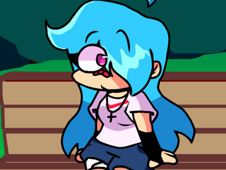 In the FNF Skyverse mod Bf has to defeat Sky in many versions of this blue-haired character, as she has appeared in many ways before, which is why the NuSKY mod is also mixed-in with this one, and you will have no less than EIGHT songs to do battle on:

Enter the Skyverse of FNF and defeat the blue-haired girls!

Whether you are playing in the story mode or free play mode, to win you have to do the same thing, which is playing your notes according to the charts until the songs end to win.

How do you do it? Simple, you press arrow keys at the same time as the identical arrow symbols float and match above BF's head.

If you miss doing it too many times in a row, you lose and have to start again from scratch. Enjoy, have fun!