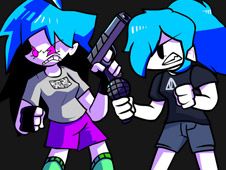 What is FNF Mask off Reconstruction (Faker sky Skyverse)?

Return to the FNF Skyverse with the new Mask Off Reconstruction mod, where you will play the role of Trusky, and have to battle against Eclipse Sky and Faker Sky, all the while being on top of a moving truck.

Reach the song's end to win, doing it by hitting your notes according to the charts. How? Well, when you see arrow symbols match above your character's head, on the right, that is when you need to press the identical arrow keys to hit your notes. Keep doing it until the end to win, but know that if you miss hitting notes multiple times in a row you lose. Good luck, enjoy!