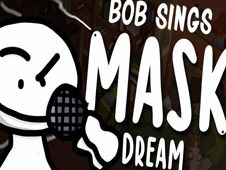 What is FNF: Bob Sings Mask by Dream?

Music duels between Bob and Boyfriend are always going to be tons of fun, which is why we never miss the chance to share these games with you all, just like right now when we've added a mod where they battle only on one awesome song, and that is Mask by the band known as Dream!

Help Boyfriend and Bob take 'Mask' to the end!

There is only one song in this game, so hit the play button, and then try reaching the end of it by playing all of its notes according to the charts. To do this, when arrow symbols above BF match, at the same time you have to press the identical arrow keys.

Be careful about missing notes, because if you miss too many of them in a row, it will lead to you losing the game and having to start it all over again from scratch. Good luck to you, and we wish you the best, as usual!