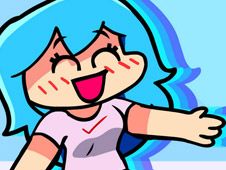 What is FNF vs Sky Remanifested?

Sky is back with the Remanifested mod, with even more Skyverse versions of her, songs, and awesome stuff for you all, and right now we are sure you will be having tons and tons of fun from start to finish with all this line-up of songs:

Sky has Remanifested, let's take her on in a brand new mod!

Make your choice between the story mode and free play mode, after which, in either of them you play, you win by reaching the end of the songs, something you do by hitting your notes according to the charts.

How does that work? When you see arrow symbols float and match above BF's head, that is when you press the identical arrow keys to hit the notes. Miss one too many notes in a row and you lose, so focus not to let it happen! Good luck!