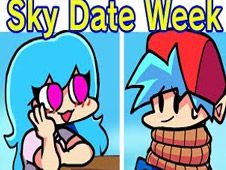 What is FNF: Sky and Boyfriend goes on a Date?

Don't worry BF and GF fans, because this game is set in an alternate universe, one where BF never met GF, and she might not even exist, which is why he thought that Sky was cute and asked her out on a date, so the two of them will now have a duet of sorts, with you here to help them take this song and dance to the end! The songs featured here are:

Boyfriend and Sky, finally together!

In both the story mode and the free play mode, your goal remains the same, and it is reaching the end of the songs by playing all their notes according to their charts, something for which you use arrow keys.

How do you use the? You watch for when the arrow symbols floating around BF match with those above his head and then press the same keys at the same time.

If you miss pressing the keys too many times in a row, you lose and have to start again from scratch, so be very careful not to let it happen, but go to the end and let love happen! Enjoy!