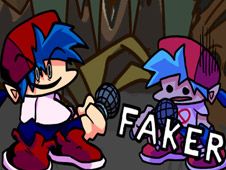 Fake Boyfriend and BF are going at it again through music since their last battle was not enough, so right now you are invited to do your best to win the rhythm battle between them on the song called 'Faker'!

The battle of Boyfriends for the title of faker begins!

As the song progresses, watch for the moment when arrow symbols above BF match one another, a moment when you need to press the identical arrow keys to hit your notes, something that you have to keep doing until the song concludes to win.

Focus on hitting your notes, because if you miss too many notes in a row, you end up losing and having to start again from scratch, something you can't want to happen, right? Good luck, and all the best we wish you all!