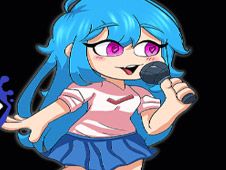 What is FNF vs Sky HD?

Sky is a girl with blue hair who is obsessed with Boyfriend, and she believes that our protagonists should be with her instead of Girlfriend, which is why she challenges him to rhythm battles as often as possible so that she can prove her worth and abilities. She is one of the most popular mod characters so far, and she now returns with a brand new version, as you are all invited to check out the game called FNF vs Sky HD!

Defeat Sky from FNF once more, this time in HD!

As you can see, despite Sky being the same character, and the original songs returning, this mod is an HD remake, meaning that all the characters, backgrounds, sprites, and everything else looks really good. Obviously, you need to reach the end of the songs with the progress bar in your favor to win, and the three custom songs are the following ones:

When you see the arrow symbols matching above BF's head, it is at that time that you press the same arrow key to hit the notes of the songs, but be careful not to miss pressing too many of the keys one after another, because if that happens you lose and have to start all over again from scratch! Good luck!