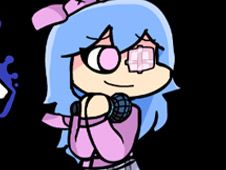 What is FNF vs Soft Sky?

Soft Sky is a more calm and chill version of Sky, the blue-haired girl that wanted to steal Boyfriend for herself, and she seems to have returned to her usual ways, which is why right now we invite you to defeat her once more, this time on the following fresh songs:

Defeat Soft Sky and get rid of her!

Whether you choose to play the game in the story mode or free play mode, the way to win is the same, and it is by reaching the end of the songs, which you do in turn by playing all the notes at the right time in the charts.

This means that when arrow symbols above BF match one another, you will press the identical arrow keys, but know that if you miss doing that multiple times in a row, you lose and have to start again. Enjoy!