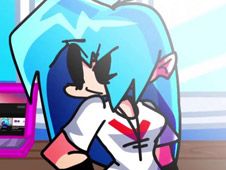 Return to Skyverse with the FNF Birdapp mod, where you're having a rhythm battle between two characters, Moesky vs Nusky, who separately are fun already, but even more so when they get together to battle!

Reach the song's end to win, something you do by hitting your notes according to the charts, so when you see arrow symbols float on the top right, that is when you press the identical arrow keys. Be careful not to miss hitting the notes too many times in a row, or you end up losing. Good luck, the best we wish you all!