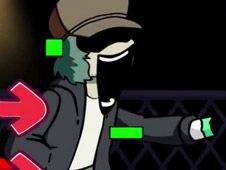 What is FNF Vs Pibby/Corrupted Garcello Mod?

It seems that even Garcello got the Pibby virus running among FNF and has been corrupted, and you now have to fight off against this new version of the character in a rhythm battle like none other, where only you defeating him through music will turn him back, and you do it on two awesome fresh songs:

Use music to defeat the Pibby Corrupted Garcello!

Whether you challenge this character in the story mode or free play mode, winning is done in the same way, by reaching the end of the songs, so when you see arrow symbols float and match above BF's head, that is when you will need to press the identical arrow keys, and if you reach the conclusion and the progress bar has tilted towards you, you won.

Be careful not to miss hitting notes too many times in a row, or you lose and have to start again from scratch. We wish you all the good luck in the world and clearly invite you around even more so!