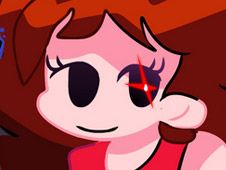 What is FNF: Rap-Battle With BF and GF?

When a rap battle between BF and GF happens, it means that the two are having some relationship issues, but we think that having this kind of musical battle is better than fighting more seriously, so we now invite you into their world by helping BF win and patch things up with his loved one, on two awesome songs:

Let's have a rap-battle with BF and GF, for LOVE!

Whether you are playing in the story mode or free play mode, the way you win is done in the same way, by reaching the end of the songs, and this only happens if you play all their notes according to the charts. This means that you have to press arrow keys at the same time as identical keys are matching above BF's head.

Be careful not to miss hitting those notes multiple times in a row, because that happening leads to you losing and having to start again from scratch. Enjoy!