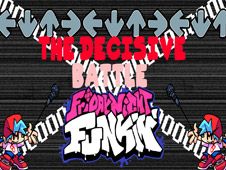 What is FNF: The Decisive Battle?

The trope of the protagonist fighting his doppelgänger, meaning someone who is exactly like him, has always been a fun one in various kinds of media, so we are very excited that it now finds its way here as well when our administrative team invites you to play FNF: The Decisive Battle. Yes, this means that you will control Boyfriend and fight against another Boyfriend, something that you do on the following tracks:

Boyfriend VS Boyfriend, who wins? You, the player!

When you see the arrow symbols above your character match one another, that is when you have to press the same arrow keys on your keyboard to hit those notes of the song, but be careful not to miss hitting too many notes in a row, since that means losing the game after too many of these misses.

You can play in either the story mode or free play mode, and no matter your choice, we wish you all good luck, and hope you enjoy your time here, as always!