The Battle Cats vs BF Mod 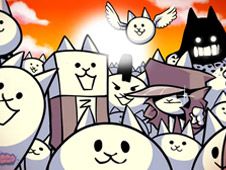 What is Friday Night Funkin’ VS Battle Cats 1.5?

The Battle Cats is a video game whose feline characters have now reached the world of FNF Games, where you are invited to go up against them in rhythm battles on all the following songs:

Defeat The Battle Cats in FNF!

Whether you are playing in the story mode or free play mode, you need to reach the end of the songs by playing their notes according to the charts.

So, when floating arrow symbols match above your character to the right you need to press the identical arrow keys to hit your notes. Miss doing it too many times in a row and it will lead to your loss. Good luck, enjoy!