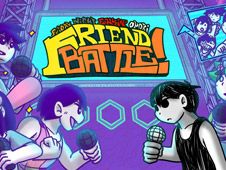 What is FNF: OMORI Friend Battle!?

In the new FNF OMORI Friend Battle mod, instead of fighting, the OMORI characters will sing with one another on the stage, letting the music do the fighting, and you're invited to try out this mod right now. It only has one song, but many features, such as the chance to be either Omori or Basil, events that happen during the song, new animations, and even some voice-acting!

When the floating arrow symbols match above your character to the right, that is when you need to press the identical arrow keys to hit the notes, doing it until the song ends to win, but be careful not to miss hitting notes multiple times in a row, that will lead to your loss and having to start again from scratch. Good luck, enjoy!