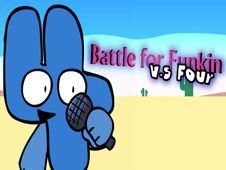 What is FNF vs Four (Battle for Dream Island) Mod?

The number Four has come to life and is now a musical antagonist to Boyfriend, as both of them are blue, and it seems that only one can remain. This character has been around before in a one-song demo mod, but now we return with the full week called Battle for Dream Island, which features the following tracklist:

BF Vs Four: let the Battle for Dream Island begin!

In either the story mode or free play mode, winning is done identically, by reaching the end of the songs, and that can only happen if you keep playing your notes until the end. So, when you see arrows match above BF, that is when you press the identical arrow keys. Don't miss doing it too many times in a row, or you lose. Good luck, enjoy!