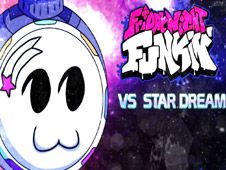 What is FnF vs Star Dream from Kirby?

With Kirby Games being very popular, it's not only the main and title character that deserves a spot to be featured in our category of Friday Night Funkin Games online but so do secondary characters such as Star Dream, which is the latest character to have been featured in this category for you to defeat in a rhythm battle, something that you will do right now on the following tracks:

Defeat the star and keep following your dreams!

Well, after picking between the story mode and free play mode of this game, you will have the three songs, and you will see arrow symbols match above BF's head, which is the moment when you have to tap the same arrow keys on your keyboard, something that must be done until the end of the song to win.

Be careful not to miss pressing the keys too many times in a row, because if that happens, you lose and have to start it again, something we don't wish for any of you. Enjoy, and good luck!