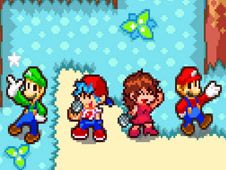 FNF: Friday Night Super Star Saga is quite the special new FNF mod online for our team to have offered you all right now here for free since we are talking about a mod that has you controlling both Boyfriend and Girlfriend at the same time, as they need to make a team that can defeat the powerful team of Mario and Luigi from Nintendo, who you will battle against on three original songs for this mod:

Do your best to defeat the star team of Mario and Luigi!

These two antagonists can be fought against in either the story mode or the free play mode, that remains to you, and in both of them, you will have to reach the end of the songs by playing all their notes properly, following the charts accordingly.

This means that you have to watch for when arrow symbols above BF's head match one another so that at that time you press the same arrow keys, something you have to keep doing until the song ends.

Don't miss pressing the keys too many times, or you lose. Good luck we wish you all, and we hope that you will be checking out even more FNF Games on our website today!