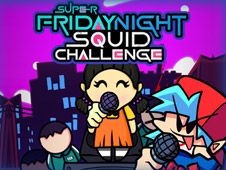 We really love it that right at this moment we can share with everyone here a brand new crossover game between Friday Night Funkin and Squid Game, two of the most popular things in the world in their genres, meaning video games and television shows, which was a combination that makes sense and which we've had here before, so we are positive you will love this rhythm game!

Win Squid Game with the power of music and rhythm!

It appears that Boyfriend has ended up in a Squid Game, but, since he is a master of rhythm, he gets special challenges, as he only has to rap battle to win and get money in return, something that you will help him do on 12 songs, each featuring antagonists taken from the show such as green tracksuit contestants, red jumpsuit guards with geometric symbols on their masks, or even the VIP's, for example.

For each rival, you have a different song, but the way to win is the same, and it is by taking the song to its conclusion, which you can only do if you play all the notes according to the charts. This means pressing arrow keys at the same time as the identical arrow symbols above BF match one another.

If you miss too many notes in a row, you lose and have to start again, so be careful! We wish you all good luck and tons of fun, and we definitely invite you to stick around for more of our games of the day, you won't want to miss out on the huge amounts of fun they offer!