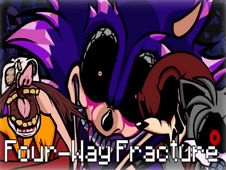 What is FNF Four-way Fracture vs Sonic.EXE?

FNF Four-way Fracture vs Sonic.EXE is a brand new spin and take on the cursed Sonic and gang characters that oftentimes appear on our website, with our team being now delighted to share with you this new mod where you have to defeat them all!

Defeat the Sonic.Exe characters in this FNF Four-Way Fracture mod!

Watch as arrow symbols float and match above BF's head, and at the exact same moment make sure to press the identical arrow keys to hit your notes, something that has to be done until the end to win. Be careful not to miss doing it too much, or you lose. When a ring note appears, press the spacebar to hit it, with them absorbing misses that you might make.

Good luck, start now, and stick around for much more fun to come here!