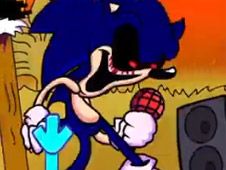 What is FNF: Vs. Sonic.Exe Duet?

You've already battled Sonic.Exe in a rhythm game before, and we know you did it many times since he has become one of the most popular characters for modders to work with, but today you are going to sing together with him since this character and BF will have a duet together, not battle one another, and you do it on the following awesome songs:

Duet with Sonic.EXE and Boyfriend for a totally awesome time!

In this rhythm game, just like all the others, you need to watch for when arrow symbols above BF's head match one another, and, when they do, you have to press the same arrow keys on the keyboard yourself, something you've got to keep doing until the song ends to become the winner, simple as that!

Be careful not to miss pressing the keys too many times in a row, since that happening ends up with you losing the whole duet because both singers need to be in sync if they are to take this song to its conclusion. Enjoy!