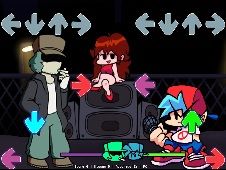 What is FNF vs Garcello Duet?

A new mod with the famous Garcello character (Smoke ‘Em Out Struggle) is available for all FNF fans. This time we will have a single week, the so-called G week, in which you will be able to try the 4 new songs that we have prepared for you. What is different in this new way is the fact that this time you will have to do a duet with Garcello, you will not have to fight against him, but to be with him to compose with him a song as interesting as possible. Girlfriend is on the sidelines and will admire you as you practice.

The Story of this diet begins when...

-What's the up little man?Did the smoke catch your attention?

-Yeah, it's pretty cool. You should try it out.

-Hm...tell you what. If you beat me in a friendly little rap battle, I'll get off your case. Sound cool little man?

-Heh, that got you hyped up. It's settled then. As long as you don't mind me smoking a bit. Helps calm the nerves, y'know?

Use the arrows to start the battle!