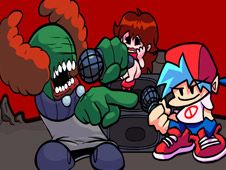 What is FNF vs Tricky Duet?

You've dueled against Tricky from Madness Combat in our category of FNF Games before, that's for certain, but have you ever had a duet with him? Yes, this time, on his original custom songs, instead of fighting against one another, you will sing together, each one having your own verses, and, of course, the songs are:

Duet with Tricky and have the best time ever with the mad clown!

Choose between the story mode and free play mode, and give it your best to reach the end of the songs by playing all their notes according to their charts, so when arrow symbols above BF's head match with one another, press the same keys yourself.

Be careful about the keys, because if you miss hitting them too many times in a row, you will lose the whole game and have to start again from scratch. Enjoy!