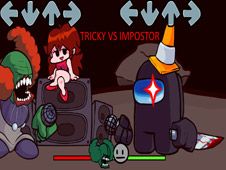 What is FNF: Tricky vs Black Imposter?

Instead of becoming BF, you will now become the Black Imposter from Among Us as the protagonist, who you will have to use in order to defeat the one and only Tricky from Madness Combat, constantly one of the most popular characters to have come over to the world of Friday Night Funkin' Games!

Is Tricky Amogus? Beat him and see!

In this rhythm game, where you can play in either the story mode or the free play mode, and with a level of difficulty of your choosing, your goal is reaching the end of the songs by playing all their notes according to the charts.

This is done using the arrow keys, pressing them at the same time as the arrow symbols above Black Imposter match, but be careful not to miss doing it too many times in a row, or you lose and have to start again. Enjoy!