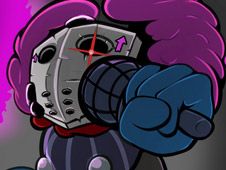 What is FNF vs UpSide Tricky?

One of the most popular characters we've had so far in the world of Friday Night Funkin Games online returns, and we're very happy he does so since everyone loves Tricky the masked clown, a scary and funny at the same time character that we're sure you appreciate a lot, and this new version of him is even cooler, so playing FNF vs UpSide Tricky right now should definitely be something you do!

Learn more about the FNF Upside Tricky mod before playing it!

The FNF UpSide mod has been one of the most popular mods in the series so far, not only for the new designs and animation, but mostly for the cool remixes of the songs you love so much, and this time you will play only against Tricky's songs, who was one of the most popular characters that appeared in the mod, and the songs featured here are called Improbable-Outset, and Madness!

Help BF defeat him in both songs, taking them to the end by hitting all the notes at their right time. When the arrows floating around BF match those above his head, press the same arrow on your keyboard to hit the note, but if you miss hitting the notes too many times in a row, you lose, so make sure you don't let that happen! Good luck!