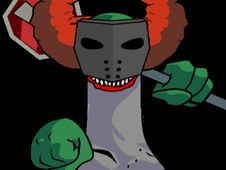 What is FNF: Tricky sings Monochrome?

Singing with Tricky from Madness Combat can be both fun and scary at the same time, and today you are going to do it on a song known as 'Monochrome', originally belonging to the FNF Hypno mod, so we are positive that you will have an enjoyable time with this fresh experience!

Tricky is always ready for music, are you?

Hit the play button to start, and, then play the song's notes at the right time in their charts, something you have to keep doing until the song ends to become the winner. To play the notes, you hit arrow keys at the same time as the identical arrow symbols match above BF.

If you miss doing that multiple times in a row, you end up losing, so don't let it happen. Don't hit fire notes either, since they are Tricky's, and it's a trap. Good luck we wish you, and we definitely invite you to stick around for more awesome games to come, only here, today!