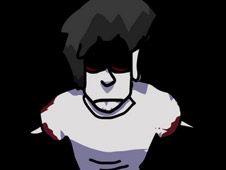 What is FNF: Shaggy sings Monochrome?

It was only a matter of time before Shaggy, the God Eater himself, would have a mod where he sings Monochrome, since new and scary versions with this song of your favorite FNF mods have been really popular lately, and if you managed to defeat the other characters, we're sure you will do it once more!

Snap Shaggy out of the trance by singing Monochrome!

In addition to the normal mechanics, this game has unknown symbols, which resemble letters of the alphabet or different keys on the keyboard, so figure out what they are most alike, and press those buttons to get an advantage. You also have to hit the spacebar when the pendulum is at its lowest in the bar to keep the Hypno going.

Other than that, press arrow keys at the right time, when the identical symbols match above BF to hit the notes correctly and keep doing it without too many mistakes until the song concludes to win! Good luck to you all, and we hope to see you here some more, as usual!