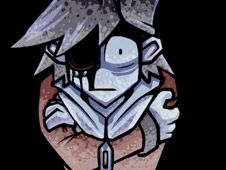 If you are ready to help Boyfriend and Hypno Lullaby characters sing Monochrome in a remix with a brand new mechanism, then you should definitely try the mod you see right on this page, a game we are positive you will enjoy a lot, just like previous games with this song has been!

Like usually, the way to win remains the same, and it is by helping BF reach the end of the song, so you need to play his notes when his turn comes, all the time, because if you miss multiple notes in a row, you lose and have to start again.

This means that when arrow symbols match above him, you press the identical arrow keys. There is also a new mechanism in this game, where different symbols appear instead of notes, so figure out which letter they resemble, and press that one from the keyboard.

Keep up with Hypno by pressing the spacebar whenever the pendulum is at its lowest. Hell Mode makes everything harder, but you can also try an easy mode where these gameplay mechanics are removed. Good luck, either way, and enjoy!