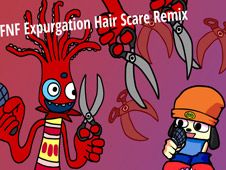 It's been quite a while since the last time you had the chance to play FNF with PaRappa The Rapper on our website, where a nasty red octopus who wants to cut his hair badly is his opponent, this antagonist being called Hair Scare, and you will have to challenge it on the song called Expurgation, definitely the most popular song of Tricky's!

Arrow symbols are going to float around PaRappa when his turn to sing comes, and when they match above his head, you have to press the same arrow keys to hit the notes, something you've got to keep doing until the end of the song if you want to win. Missing the notes too many times in a row causes you to lose, so be careful not to let it happen. Enjoy!