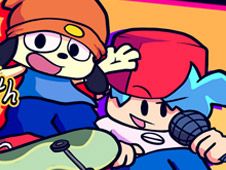 What is Friday Night Funkin’ with Parappa?

PaRappa the Rapper is the video game character that has inspired the craze of rhythm games that we are currently living in, and we're not at all surprised that he would pop up in FNF Games quite often, just like it is the case today, when Friday Night Funkin’ with Parappa is not the first game in the category to feature him, but the most complete one so far, and definitely the most enjoyable!

Both Boyfriend and PaRappa want to impress their Girlfriends, and in this game, you can choose to be either of these characters, and you will battle either the FNF characters or some PaRappa characters, depending on the protagonist you want to be.

To win a battle you need to reach the end of that song and sing or rap so well that the progress bar is filled up more towards your side, and not your opponent's.

To achieve that you will use the arrow keys to sing the notes and follow the charts, so when arrow symbols above the protagonist match one another, you need to press the same arrow keys.

You lose if you miss doing that too many times in a row, so make sure to focus and don't allow it to happen. Start now, enjoy, and stick around for more fun to come!