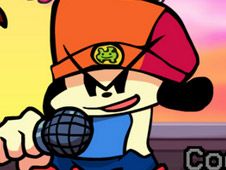 The PaRappa Games that appeared way long back are definitely the games that made rhythm games what they are today, and they were a huge inspiration for the original creators of Friday Night Funkin' Games, so it is not at all surprising that right now and here we get a crossover between the two series, finally, in the form of the game called Friday Night Funkin' x PaRappa!

PaRappa the Rapper is the name of the original rhythm game focused on the character with the same name, who is a dog who really loves music, especially rap, and not just to listen to it, because he also raps himself, something that you will help him do in this game as well since he becomes the protagonist that replaces Boyfriend. He is a dog with big ears who wears red sneakers, baggy blue pants, a blue t-shirt, and a red beanie on his head as well.

How to help PaRappa the Rapper defeat the music villains:

You will do it just like you did it with Boyfriend, helping him all the notes to the song at the right times, which you do by pressing the arrow keys on the keyboard at the exact same moment that the floating arrow symbols from the screen match with one another, not a moment sooner or later.

If you have too many misses coming in a row, one after another, you will lose, so do not let that happen at any cost! Choose an easy level of difficulty if you're new to the franchise, but always give your best to win!