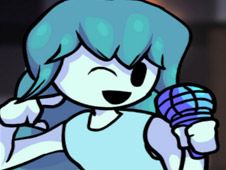 What is FnF with Spooky’s Jump Scare Mansion (Serenade)?

Spooky’s Jump Scare Mansion is a horror video game with a lot of scary characters that pop out of nowhere at random places in order to scare you, and these characters you will now make scared instead by defeating them all in rap battles of rhythm, all in this awesome new FNF demo mod with three songs, and which we will update with the full 16 ones when it is done in full. The songs are:

Defeat the spooky monsters through music!

Well, for starters, know that this game is playable in either the story mode or the free play mode, it's up to you how you play it, and in either case, your goal remains the same, which is playing all the notes when your turn comes, and keep doing it so until the end of the songs to win.

When you see that arrow symbols above BF match one another, press the arrow keys to play the same notes, but know that if you miss doing that too many times in a row, you lose and have to start again from scratch. Enjoy!