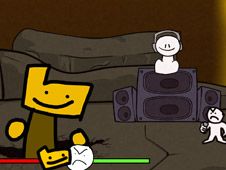 What is FnF: Ron and Little Man sing Expurgation?

Both Ron and Little Man are two characters from Friday Night Funkin that are not so scary at all, so seeing them play a song such as Expurgation from Tricky's mod against one another will be quite the sight to see, but, even better, you get to play the song together with this duo, in this awesome new FNF mod we are happy to have shared with you all right now!

Help Ron and Little Man sing Expurgation with no error!

In these games, in order to win, you need to reach the end of the songs by playing all their notes, and this is done using the arrow keys, so when you see arrow symbols above your character match one another, you need to press the same arrow keys yourself.

Keep at it until the end of the game, but be careful not to press wrong keys, or press the correct ones at wrong times, since too many of these mistakes mean losing the game. Enjoy!