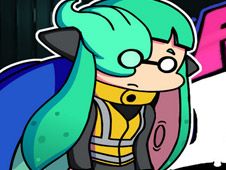 What is FNF: Expurgation Splatoon Reskin?

We are once more welcoming you all back into the Friday Night Funkin' Games category with a brand new mod you can't miss out on, and this mod is called FNF: Expurgation Splatoon Reskin, where the characters have been reskinned into characters from Splatoon, and you will play the role of Agent 8 who has to defeat the corrupted version of Agent 3, all on one of the most difficult rap songs in the series: Expurgation!

Challenge the Expurgation remix with characters from Splatoon, right now!

As per usual with games from this category, the goal you have is reaching the end of the songs and turning the progress bar in your favor, something that you do by pressing arrow keys at the same time when the arrow symbols are matching above your character since that is how you play all the notes of the songs at the right time.

Be careful not to miss pressing the keys too many times in a row, because if that happens, you lose and have to start all over again from scratch, and you can't want that happening, right? Good luck to you!