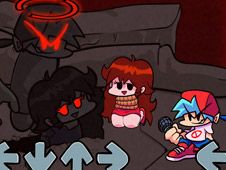 What is FNF Expurgation but Swapped?

New FNF mods of Expurgation can be found almost any week on our website, and this week is no different, with our team inviting you all right now to check out FNF Expurgation but Swapped, where BF and Girlfriend swap places with Tricky, and this game also brings brand new vocals for the characters.

Yes, you will play as the regular BF that you know and love, and face off against a BF and GF that are evil and look similar to Tricky, and this is because he has somehow used his magical powers to transform himself into them.

When you see the arrow symbols matching above your character, press the same arrow keys at the same time, and keep on doing it until you reach the end of the songs to win.

Be careful not to miss pressing too many keys in a row, because if that happens, you lose and have to start again from scratch, something that no rhythm player wants. Have fun!