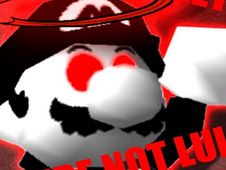 What is FNF vs Mario Expurgation?

Mario is one of the most popular characters to appear in our category of Friday Night Funkin Games online, where we are very excited that this beloved video game character returns right now as well when he becomes the antagonist in the mod called FNF vs Mario Expurgation, where Expurgation is the song he and Yoshi are going to sing, and you are going to give it your best to defeat this version of Mario, whose eyes are red and looks ready to go crazy!

Do you have what it takes to defeat Mario on Expurgation?

When you see that the arrow symbols floating around your character are matching with those above his head, it is at that moment that you need to press the same arrow key on your keyboard to play that note on the song's chart, and when the progress bar is in your favor and the song is done, you won.

You can lose by missing to play or sing too many notes in the songs, so make sure it does not happen, either by not pressing wrong keys or by pressing them at the wrong times. Good luck we hope you have, great timing, and we hope to see more of you on our website, the fun is still going on!

FNF vs Betty the Witch
ADVERTISMENT