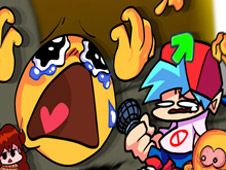 What is FNF: Crying Cursed Emoji over EXPURGATION?

The Crying Emoji meme is the newest antagonist that Boyfriend has to face with your help in our series of Friday Night Funkin' Games, and you are doing it on the already-classic song called EXPURGATION, which we know that so many of you love a lot, so it's going to be a fun and enjoyable rhythm battle!

Defeat the Crying Cursed Emoji and prove you are a master of rhythm!

To play this game you only need the arrow keys, pressing them at the same time as the identical arrow symbols above BF match one another, and if you do this until the song ends and the progress bar turns in your favor, you've won. Be careful not to miss hitting too many notes one after the other, or you lose the whole game.

It's that simple, so we wish you all good luck right now, and invite you to stick around for more fun to come!