Friday Night Funkin' BUT IT'S CURSED

FNF vs TABI The cursed King 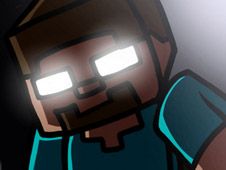 What is FNF: Friday Night Cursed Vs. Herobrine?

Herobrine is the mysterious Minecraft icon figure that all of you know, but have never seen in the game, and now you have the amazing chance of fighting it in a rhythm battle on our website, all in this awesome new mod known as Friday Night Cursed, which has a bit of a spooky feeling to it, since it's Halloween month, and you will have two awesome custom songs in it:

Defeat the Minecraft figure with the power of music!

After picking between the story mode and free play mode, no matter what you chose, give it your best to reach the end of the songs by playing all their notes according to the charts.

To do this, when arrow symbols above BF match one another, you need to press the same arrow keys, but know that if you miss doing it multiple times in a row, that leads to you losing. Good luck, enjoy, and have fun as only here is possible!