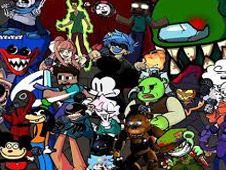 What is FNF: Everyone from Creepypastas sings Expurgation?

Many characters from Creepypasta, inspired by Minecraft, Sonic, Teletubbies, and more, have gathered together to sing one of the most demonic songs in the whole world of Friday Night Funkin', and, of course, we're talking about the really awesome song from Tricky's mod, which is known as Expurgation!

Sing Expurgation with all your favorite creepy characters!

As the title suggests, characters from this world will take turns in singing verses of the song, so when you see arrow symbols above your character match one another, press the identical arrow key from the keyboard.

You have to do that until the song concludes to win, but if you press keys too early or too late, or press the wrong keys multiple times in a row, that leads to you losing, so focus not to let it happen. Good luck, and have fun!