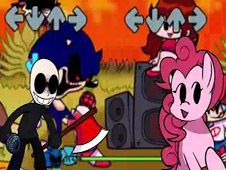 What is FNF: Everyone from Creepypastas Sings Too-Slow?

Creepypastas is a website where you can find out about all sorts of new horror internet creations, such as Slenderman, Sonic.Exe, Jeff the Killer, Cablecrow, Suicide Mouse, Shadow Mario, and other scary beings have made their debut, and now they have come together to sing the song known as Too-Slow, together with you!

It's time for a Creepypasta musical!

When it is your turn to sing, you will see arrow symbols float and match above your character's head, and, at the same time you need to press the identical arrow key from your keyboard, something that you need to keep doing until the song concludes to win it.

If you miss pressing the keys too many times in a row, the song is beyond ruined, and you lose, forcing you to start again from scratch. We wish you good luck and all the best, and definitely invite you to stick around for more fun to have!