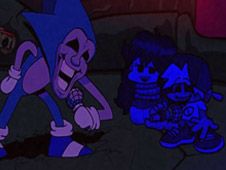 Sonic is more and more popular in the series of FNF Games online on our website, and there are now multiple versions of this character that you can play against, just like it is the case right now when you have to defeat him in his Majin Sonic form, and you do it on one of the scariest and hardest songs ever, Expurgation from Tricky's mod.

Can you defeat Majin Sonic on Expurgation?

If you think the answer is yes, then waste no time, and challenge him by hitting the play button. Watch for when the arrow symbols above BF's head match one another and keep doing so until the song ends if you want to win. Be careful not to miss pressing the keys too many times in a row, since that happening means you lose and have to start it all over again from scratch. Enjoy!